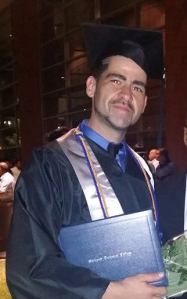 David Drieling is a living example that you can accomplish anything if you are determined.  God has blessed David to overcome in many areas of his life. It was five years ago that God began the most important change when he was saved David from a destructive life of sin.  Before he gave his life to Jesus David lived a reckless life filled with drugs, alcohol, and wild partying. But that all changed for David when he moved Atlanta after being in a terrible car accident. During this wreck, he was thrown 75 feet and suffered severe brain trauma. He had to relearn how to walk, speak appropriately, and relearn how to do normal things we take for granted. The accident also caused his left arm to stay in an L shape, and his hand stayed in a tight fist locked to his chest. Because of his injuries he was unable to button his pants, tie his shoes, or drive.  Despite his limitations, he prayed and believed God would heal him. God began healing David’s body, and David gave up the wild parties and drugs began a healthy lifestyle of eating right, exercise, and spent hours every day in the gym to rehabilitate his body.

God was doing great things in his spiritual life and David was taking better care of his body but he was also determined to further his education. At age 20, David dropped out of high school with a 1.7 GPA. Although the doctors told him he had brain damage from the car accident, and he hadn’t been in school for some time, David did not let that stop him. He took the GED, enrolled in college, and graduated from college with an associate degree in Applied Science with a 3.7 GPA.

A lot of people believe that if you don’t do very well in grade school you can’t go to college and if you do it will cost too much. This is proof to disprove that. Ten years later I didn’t have to take out any student loans, and I will begin working on my bachelor’s degree debt free!  If you are wondering, why is he making such a big deal about going to a university? I dropped out of high school not because I was stupid but was because I never applied myself.”

Not only has David finished college but was blessed with a job as an operational manager of a popular franchise. And God has been faithful in healing him.  He now owns a car and can drive. “I am jumping over all these obstacle’s I was told where pretty impossible. No one can stop me! Let this encourage any and everyone. Never let your circumstances dictate your outcome in life.”