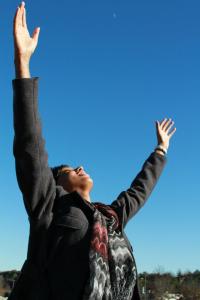 When I was 18, I had my first run in with the law. What I thought would be a simple case and trial turned into 3 years of court dates. When I graduated high school, no more than a few months later, I got kicked out my mom’s house.  I would have to say that was the beginning of my adult life going down the wrong path. When most people were in college I was working fulltime to provide for myself.  For the next following months I was hopping from place to place staying with who would let me,  whether it meant me staying for one day or sneaking in and out a friend’s house.  Eventually I found stable living with a roommate and things were pretty cool for a while. When I started the process of going back to school I moved back into my mother’s house so I could focus on school and not have the stress of school and rent on my mind. Moving back to my mom’s house at that point in life was horrible. Me and my step father at that point in time had a bad relationship. It was usually a constant argument or I would walk on eggshells to avoid an argument. I remember at 18 trying to figure out how I would make a life for myself making a little over minimum wage and no college degree. I had to grow up quick because I had no one to lean on. An acquaintance came to me with a quick money scheme. Looking at my circumstances I was stressed out already. My mission was to make enough money, get a car, get an apartment and go to school. I thought about the consequences and decided the risk was worth it. So I proceeded to get involved with the scheme. Needless to say I get in way over my head.  The initial crime I was supposed to do end up being bigger than I had imagined. The crime (I need no reason to mention specifically) landed me in jail, with 22 felony counts. Because of the seriousness of the charges I was interrogated by the secret service for hours and went thru 3 different lawyers during the time frame of the case. I spent a little time in jail, and stressful months on house arrest at my mother’s house. I eventually get released from house arrest for good behavior. Soon after I get kicked out again. This time I really didn’t have anywhere to go. My friend also had nowhere to go and we teamed up and were homeless to together. Some nights we stayed in his car. I eventually meet some folks that had a house and stayed there until they started stealing from me and I left there no much longer after that. My mother had come to me with the option of coming back home. I had to choice of going back home and dealing with the nonsense that was there before or take on the real world and make it on my own. I choose to make it on my own. At this point I’m staying at a hotel by myself. It wasn’t perfect but I had a stable place to stay.  I messed that up by selling weed on the premises so instead of calling the cops on me they just told me to go. Now I’m in a rut again about where I’m going to live I’m stressed, depressed and have no one. Then this person I’ll just call her “Cee” comes into the picture and asks me do I want to go to Florida. I say yes, and a few months later I’m in Florida. Fast forward, so I’m in Florida now and I’m staying in the nicest house I’ve ever seen. It’s beautiful and warm. I felt like I was in paradise.  A week into my stay there a bombshell gets dropped on me. Everyone in the house is an escort and they wanted me to be a part of it. Negative.  I get into an argument with the guy running the whole house. I told him I’m leaving I’m not doing this and he calls me stupid for not wanting to be involved. After that I go into the room I was staying and prayed, “God I don’t know how I got myself in this mess but I need you to get me out.”  The next day I get dropped off at a Wal-Mart in Plantation, Florida. No one knows I’m here none of my friends or family. I just left New York and didn’t say a word to anyone. I’m 19 years old; I have bags of clothes and no money or phone. I asked a stranger to use the phone and got in contact with a family member who came and got me. I stayed there until I got on my feet. Fast forward, I move to Georgia. I get to a point where I apologize to my mom. I blamed her for all the stuff I went thru because I got kicked out her house. I let go of all the animosity and bitterness and it hit me that parents aren’t perfect they make mistakes too and not to hold it against them. Fast forward to 21 where I get a letter saying my whole case has been thrown out. To this day I have a clean record. I thank God for sparring me and hearing my prayers because He didn’t have to. My life could have been completely different. I’m truly grateful God kept me safe and had his hand over me. A year later I get saved.

One thought on “A troubled teen finds rest and stability in Jesus.”