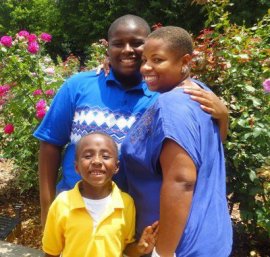 No one wants to endure the pain of breaking a leg or spend weeks walking with a cast but if it had to happen, at least single mom Kizzie Bell can say she broke it while playing flag football with her boys.

Playing flag football is nothing new to this single mom. But one day last year the boys convinced her to play a game of touch football with them and some friends.  She was about to catch one of the boys but he shook her and although she tried to stay with him she twisted her ankle and fell braking her leg.

She also plays tennis with her sons, shoots basketball, passes and catches the baseball and taught her youngest son Christian how to dribble a basketball.

“I do it because being a mother with boys I feel they need that. I can’t have boys doing girly stuff. I’m raising boys with no man in their life. I had to put myself in that role to make sure they could shoot a basket, throw a ball, etc. I don’t think it is something special. I only do what I think is needed for my teenagers. As a mother if you have a need or lack you make it happen.”

Along with driving lessons, checking the oil in her car, filling out job applications, making sure they do their homework, sports is just one of her many duties as a mom.  But Kizzie also thinks it is important they spend time-serving the community.  Last year she sent her oldest son Tysheem on an outreach to help after the hurricane in Alabama.

“It’s important for me not to be raising a selfish boy. He has been raised a little more privileged than I was and spiritually I need him to know that we are blessed.”

Last week Kizzie and her boys went to feed the homeless.  And these types of activities aren’t an option for her boys.  “I think it is important for them to know the other side of things, that there are those who are not as privileged and this life is not all about self. That life is also about giving and service.”

One thought on “Supermom broke leg while playing football with sons.”