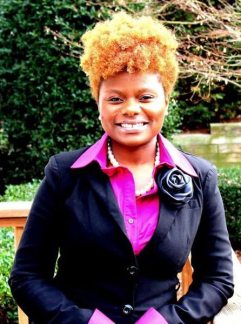 I have always known in my head that God is my Provider, but it wasn’t until summer 2011 that I began to know in my heart that He is. Until summer 2011, I had been working full-time and was pretty stable financially. I didn’t know it, but I began to slowly allow my job to become my idol.

When someone was terminated from my former place of employment, I immediately began to fear and my mind ran through the gamut of ideas of what would happen if I lost my job. I had placed my complete identity and trust in my work and believed that if I didn’t have my career, I was a failure.

Well, I was laid off in July 2011 from my previous employer. I was hesitant to tell friends and family because I was embarrassed, and I didn’t want to have to explain. In addition, I had an image to uphold! But God wasn’t concerned about my “image.” As a matter of fact, He wanted to strip me of that image because it wasn’t in His likeness. I went through the stages of grief and found myself to be somewhat depressed. Earlier that year, I had planned to go on a missions trip to China, and all I could think about was the fact that unless God came through for me it was somewhat impossible for me to have the finances to go.

I wasn’t eating or sleeping and I daily had to battle the thoughts that I wasn’t worth anything. I knew it was the enemy telling me “Look at you. You have all those degrees and no job. You are worthless.” The first two months of not being full-time employed were challenging. But through it all, I was able to pick up some contract work here and there.

Miraculously, my needs were always met and my credit card debt from college of a few thousand dollars was paid off. In addition, God placed it upon someone’s heart to fund my mission’s trip, which I will be attending March 22-April 6, 2012. After 6 months of no full-time work, I was offered a position with a local agency, which resulted in me having a substantial raise in salary from any jobs I had ever worked!

Today, I no longer go to work in fear because I know that my job is not my provider, God is. Although full-time work had ended temporarily, God’s favor and provision continued on. It may sound funny to say, but I would endure that hardship all over again because I know now that it was for my good. It showed me that I am not awesome because of my degrees, profession, or any other accolades. I am awesome because of Who lives in me. Today I stand bold, courageous, and confident that I can trust God with my life

One thought on “My job is not my provider, God is.”

Forgiveness Matthew 6:14 For if ye forgive men their trespasses, your Heavenly FATHER will also forgive you.Colossians 3:13 Forbearing one another, and forgiving one another, if any man have a quarrel against any even as CHRIST forgave you so also do ye.